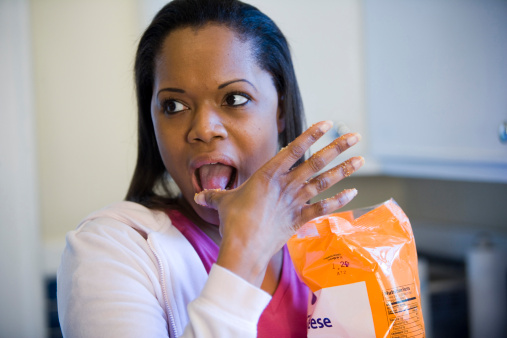 One minute, you’re innocently going about your day—the next, you’re in the clutches of desire. Your object of lust: a samosa, chocolate cupcake with buttercream icing, that bar of chocolate or ice cream. Next thing you know, you’re licking icing off your fingers.

What just happened? You were clobbered by a food craving! You are not alone, one study points out that 91% of women said they experienced strong food cravings. And willpower isn’t the answer.

These urges are fueled by feel-good brain chemicals such as dopamine, released when you eat these types of foods, which creates a rush of euphoria that your brain seeks over and over.

So what’s the solution? What you need is a plan that stops this natural cycle—and helps prevent unwanted weight gain. The next time you’re hit with an insatiable urge for a double-chocolate cookie or any other food craving, ask yourself these three questions to get to the root cause, then follow the expert tip tailored to your trigger.

1. Ask yourself: Am I stressed out?

When you’re under pressure, your body releases the hormone cortisol, which signals your brain to seek out rewards. Comfort foods loaded with sugar and fat basically “apply the brakes” to the stress system by blunting this hormone. When you reach for food in response to negative feelings such as anger or sadness (like potato chips after a fight with your spouse), you inadvertently create a powerful connection in your brain. Its classic brain conditioning, the food gets coded in your memory center as a solution to an unpleasant experience or emotion. Face that same problem again, and your brain will likely tell you “Get that cupcake!”

Stimulate happiness. Women especially have a profound emotional reaction to music. Create upbeat playlists to listen to whenever a food craving strikes. The songs provide a distraction and an emotional release.

Or Wait it out. People give in to cravings because they think they’ll build in intensity until they become overwhelming, but that’s not true. Food cravings behave like waves: They build, crest, and then disappear. If you can “surf the urge,” you have a better chance of beating it altogether.

You can also choose the best distraction. What you’re really craving is to feel better. Identify your current emotion—are you bored?, stressed? anxious?, mad?—by filling in these blanks: “I feel ____ because of ____.” Then find an activity that releases it. If you’re stressed, channeling nervous energy into a workout can help; if you’re upset over a problem at the office, call a friend and ask for advice.

2. Ask yourself: Have I been eating less than usual?

If you’re eating fewer than 1,000 calories a day or restricting an entire food group (like carbs), you’re putting your body in prime craving mode. Even just three days of strict dieting decreases levels of the appetite-reducing hormone leptin by 22%. Experts note that “restrained eaters”—dieters who severely limit calories or certain foods—aren’t necessarily thinner than regular eaters; they’re actually about 1 to 2 BMI points higher, or the equivalent of 10 to 20 pounds, as their self-imposed food rules often backfire. Restrained eaters are more likely to experience cravings and to over-eat the “forbidden” food when given the chance. In a recent study, women who were asked to cut carbs for 3 days reported stronger food cravings and ate 44% more calories from carb-rich foods on day 4. Making certain foods off-limits can lead to obsessing and bingeing.

Lift any bans—safely. Plan ways to enjoy your favorite foods in controlled portions. Get a slice of pizza instead of a whole pie, or share a piece of restaurant cheesecake with two friends.

Don’t “eat around” food cravings. Trying to quell a food craving with a low-cal imitation won’t satisfy your brain’s memory center. If you’re craving a milkshake, yogurt won’t cut it—especially if you’ve been depriving yourself. You may even take in more calories than if you’d just had a reasonable portion of what you wanted in the first place. Munching five Crips, a handful of popcorn, and a bag of pretzels, all in the name of trying to squash a craving for potato chips, will net you about 250 more calories than if you’d eaten a single-serving bag.

3. Ask yourself: Am I getting enough sleep?

Few sleepless nights are enough to drop levels of the hormone leptin (which signals fullness) by 18% and boost levels of ghrelin, an appetite trigger, by about 30%. Those two changes alone caused appetite to kick into overdrive, and cravings for starchy foods like cookies and bread jumped 45%.

Have some caffeine. It can help you get through the day without any high-calorie pick-me-ups. It won’t solve your bigger issue of chronic sleep loss, but it’s a good short-term fix until you get back on track.

Portion out a serving. You probably don’t have the energy to fight it, so try this trick: Before you dig in, dole out a small amount of the food you want (on a plate) and put the rest away.

Eat like a King for Breakfast, a Queen for Lunch and a Pauper for Dinner