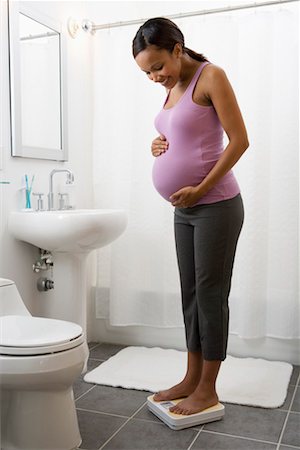 Even though gaining weight is a natural and necessary part of pregnancy, some women can’t get past the numbers that will start to creep up on the scale.

They’re worried about gaining too much weight during pregnancy and that their bodies may never look the same post-pregnancy. Some women reportedly put off having children because of this fear.

Before pregnancy, start working toward the acceptance that your body will go through a lot of changes, and though it may never be exactly the same after you have a baby, you will never be the same either. That being said, plenty of women do bounce back to their pre-pregnancy weight or a number close to it. Instead of focusing on your weight, concentrate on health and fitness, which will be good for both you and your baby-to-be.

Women need to develop a willingness to view bodily changes as part of the journey of motherhood, instead of something to be feared. It’s crucial to have a healthy view of your body during and after pregnancy.

DOES PREGNANCY AND BIRTH REALLY MAKE YOU FORGETFUL?