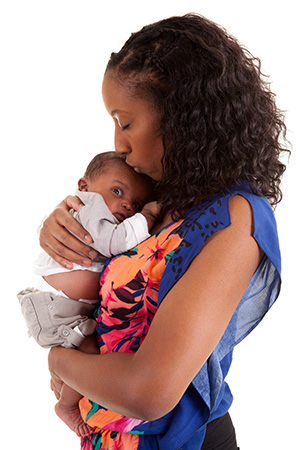 Next to the common cold, ear infections are the most common disorder in children.

The painful facts are that more than 80 percent of children will be diagnosed with an ear infection by the time they celebrate their third birthday, almost half of these kids will have suffered from three or more ear infections by age 3, and the prime time for ear infections is between 6 and 24 months.

Why Are Kids Prone to Ear Infections?

First a quick explanation: ear infections occur when fluid gets trapped in the middle ear (an air-filled space located behind the eardrum) and becomes infected by bacteria or a virus. This is most likely to happen when the eustachian tube (a narrow passageway that connects the throat to the middle ear) becomes blocked. Typically, this blockage is caused by swelling or congestion from a cold, which is why an ear infection often develops on the heels of a cold. Allergies can also cause inflammation that obstructs the eustachian tubes.

Anatomy is a contributing factor as well. A child’s eustachian tubes are shorter, less angled, and floppier than an adult’s, which means that both fluid and germs are more likely to get trapped in the middle ear. In addition, a child’s immune system is still developing, so she has a tougher time than an adult in fighting off viruses and bacteria.

How Can Parents Identify an Ear Infection?

Because infants and toddlers don’t yet have the language skills to let you know how they’re feeling, detecting an ear infection is especially hard. Older kids might come to you and say, ‘My ear hurts,'”

An infant obviously isn’t going to be able to do that. So what can parents be on alert for? In general, a fever above 102 degrees F. is one of the hallmarks of an ear infection in a nonverbal child.

Ear tugging is not a reliable sign, but ear infections are painful, so your child’s tears or increased irritability may be a symptom. Also, if your baby becomes more upset when she’s lying down, an ear infection may be to blame, because that position puts pressure on the eustachian tubes. Other indicators of an ear infection can include difficulty sleeping, diminished appetite, vomiting, or diarrhea. And you may notice that your child doesn’t hear well; she/he may not respond to sounds around her as she normally would, for example. Rest assured — her hearing will come back once the infection is gone and her ear is free of fluid.

A definite red flag: fluid or pus draining from your child’s ear. This can signal a perforated eardrum, a condition that can develop if the fluid in the middle ear puts so much pressure on the eardrum that it bursts. Although a burst eardrum may sound scary and can be very painful for your child, the hole is not serious and will usually heal by itself.

Are Antibiotics Needed for Ear Infections?

Though antibiotics are very often used to treat ear infections, the latest thinking is that doctors needn’t immediately whip out their prescription pads. In some cases, a watch-and-wait approach may be appropriate. Science is now showing us that 80 percent of the time, kids will get better without an antibiotic.

That’s because one-third of ear infections are caused by viruses, which don’t respond to antibiotics. And some of the infections caused by bacteria will improve on their own. Moreover, repeated doses of antibiotics that may be unwarranted can spur the development of resistant bacteria, which is another big problem.

There are no guarantees, but you can take these steps to lower your child’s odds of ending up in the doctor’s office.

How Can I Ease My Child’s Ear Infection Pain?

To lessen your child’s discomfort from an ear infection, your pediatrician may recommend acetaminophen or ibuprofen. But avoid over-the-counter eardrops unless your doctor recommends them, as they can cause permanent damage if your child’s eardrum is perforated. Also steer clear of flying on a plane when your child has an ear infection because the change in air pressure can significantly increase pain or even rupture the eardrum.

DO BABIES HAVE EMOTIONS?