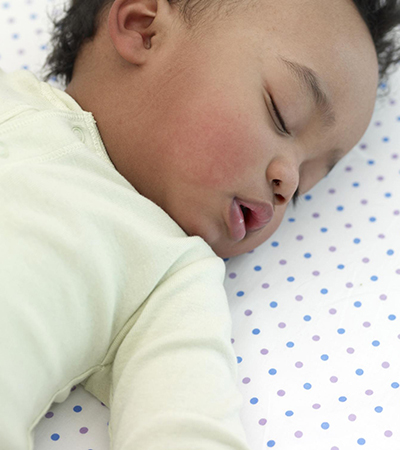 Pediatricians recommend that  infants be placed on their backs for sleep, as this is the safest position for an infant to sleep.

Putting your baby to sleep on his back decreases his chance of sudden infant death syndrome (SIDS), which is responsible for most infant deaths during the first year of life.

Some findings suggest that an infant who sleeps on her stomach gets less oxygen or gets rid of carbon dioxide less because she is “re-breathing” the air from a small pocket of bedding pulled up around the nose.

In addition, recent findings suggest that certain regions of the brain may be underdeveloped in babies who die from SIDS. When these sleeping babies encounter a situation challenging to their well-being, they may fail to wake up to remove themselves from danger. Since it is impossible to identify which babies may not arouse normally, and because the relationship between SIDS and sleep position is so strong, it is recommended  that all infants be placed to sleep on their backs.

Some doctors once thought that sleeping on the side might be a reasonable alternative to back positioning, but recent evidence has shown that side sleeping also should be avoided for safety reasons. This recommendation of putting the baby down on her back applies to infants throughout the first year of life. However, it is particularly important during the first six months, when the incidence of SIDS is the highest.

Even when you are sure your baby is lying on her back when going to sleep, it is also important to avoid placing her on soft, porous surfaces such as pillows, quilts, comforters, sheepskins, or bean bags—even soft materials used for stuffed toys—which may block her airway if she burrows her face in them.

Also avoid having her sleep on waterbeds, sofas, or soft mattresses. A firm crib mattress covered by a sheet is the safest bedding. Keep all soft toys and stuffed animals out of your child’s crib throughout infancy. Keep the temperature in your baby’s room comfortable and do not place her near air-conditioning or heating vents, open windows, or other sources of drafts.

Things about Breastfeedings Mums Wish They Were Told