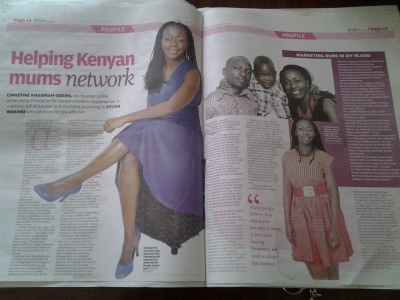 CHRISTINE KHASINAH-ODERO, the founder of the networking enterprise for Kenyan mothers Supamamas, is a woman full of passion and charisma according to SYLVIA WAKHISI who sat down for tea with her.

After weeks of chatting and planning, I am finally about to meet Christine Khasinah-Odero, a charismatic woman with a strong personality, who has stolen the hearts of many mothers.

From our chats on Facebook, I can easily tell that this is one witty woman I am about to meet. Her responses are always accompanied by a humorous remark. She has always managed to leave me laughing yet I have not met her in person. And as I set out to meet her for tea one lovely afternoon, I feel that I am not going to meet a stranger but a friend who I had known for months. From the description she has given me, I easily spot her from the crowd. She is in the company of her son and sister-in-law.

The third of five children, 34-year-old Christine is a study in contradictions. Her appearance portrays her as this tough, no-nonsense lady, far from the witty lady I have been chatting with. But just as I am steeling myself for prima-donna drama during the interview, she turns out to be one of the most accommodating and down-to-earth person I have ever met.

“People tell me I am tough. I am actually used to that. But don’t freak out. I was given a very tough screen saver but I am very gentle and approachable,” she says with a hearty laugh. “There is also a genetic side to it. I think I borrowed that look from my dad. He always had that tough and focused look,” she says.

Growing up in Nairobi’s Umoja estate, she was a daddy’s girl and admired her father for his diligence and hard work. She has equally received a lot of support from her mum who works at a leading auditing firm. She has also drawn inspiration from her siblings, two of whom are mums.

“My dad is a retired director of an insurance firm. He was a very hard-working and focused man and encouraged me to work hard right from my primary school days in Umoja Primary School. We are very close friends and I believe I borrowed a lot from him,” she says.

marketing manager for a tour company. However, after the post-election violence, the industry went down. I decided to start my own tour company focusing on local tourism, which unfortunately didn’t stand the test of time. It collapsed after three months,” she says.

She took some time off to think about her next course of action and it became clear that looking for employment was her only option at the time.

Determined to make a decent living for herself, she went around in search for another job and that is how she landed at the garage. She says that though she was over qualified for the job, she didn’t let that get to her head. Instead, she purposed to learn the business and set out to do what she knew best.

“After a while, my job became so routine. There was no ‘fire’ in it. I felt unfulfilled,” she says. Just like any new mum, Christine faced a dilemma. She felt she lacked vital information and resources that would help her through the journey of motherhood.

“I didn’t know how I was going to handle and care for my newborn son, from feeding, bathing him and even getting him to sleep. I realized such information was very vital for any new mother and perhaps, there were many new mothers who also needed it. And that’s when the idea of starting Supamamas struck me and I purposed to bring it to life,” she says.

She finally quit her job in August 2011, to fully concentrate on running Supamamas. By that time, she had organized one event, which unfortunately didn’t succeed. Despite this, she did not lose hope.

“In the beginning, the reception of the idea by other mums was not good. I even remember one event I organized in December but people didn’t turn up. There were no organizations to partner with. But I soldiered on. I sought the company and advice of other seasoned entrepreneurs who offered me a rich menu of information that I needed to make it work. I also invested heavily in books and spent much of my time reading on how to become a successful entrepreneur,” she says.

Christine was determined to succeed. And it is that strong will that has seen her stand out and make a unique brand for herself.

“I wanted to give an edge to my events and I am happy with the progress we have made with more than 15 events done in the past two and a half years and a following online of more than 14,000 mums. Many people believe that when you become a mum, it becomes boring. However, we seek to dispel this notion and add the glitz and glam to mothers out there through some specific event we do like the Mum Pampering Event. The other events vary in theme and focus on equipping mums with information or helping them improve their professional lives. It is super exciting to be a mum,” she says.

“They are more of consumer driven events. Mums share their thoughts and experiences and make suggestions on what they feel need to be incorporated, depending on their needs, “ says Christine. “The impact has been great. It has made many mums become bolder and has given them the confidence to step out and become better,” she says.

Supamamas is also passionate about mentor ship and community service and has organized events in this area. Christine plans to spread her base to other parts of the country and also across Africa. She also hopes to grow the digital aspect as the website continues to get traction and move past the 4,000 hits per month.

“Our vision is to get more inspiring women to come and inspire more generations. I have achieved greater satisfaction in connecting mothers and helping them grow from one level to the next and above all, become good mothers,” says Christine.