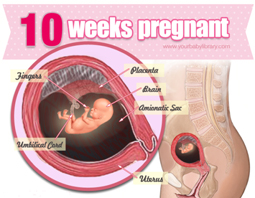 Now that you’ve reached 10 weeks, you can stop wondering when you’ll start to actually look pregnant. It’s probably right around now, as your baby continues her rapid growth and your tummy starts to develop some extra curve (of course, you still might be the only one who notices). In the process, your ligaments and muscles are starting to stretch, so don’t be surprised if you start feeling some aches and pains. While, some mums-to-be don’t really get them, others find these sensations — called “round ligament pain” — well, downright painful. Your breasts have probably gotten bigger too, since they’ve been prepping for breastfeeding for weeks already! That’s why week 10 is probably a good time to stock up on some new, looser clothes — and maybe your first round of maternity wear. Don’t go too crazy though. As your body continues to change, you’ll likely want to get some more essentials along the way.

your baby’s the size of a prune! 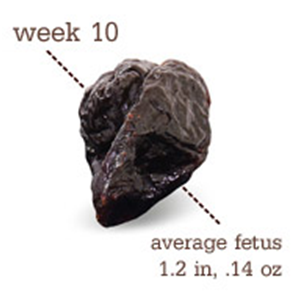 Now, she’s about 1.2 inches long and weighs about .14 ounces. Her body length will almost double in the next three weeks. 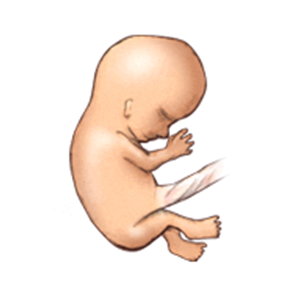 your baby at 10 weeks